If you’ve been seriously injured by a pneumatic nailer, or “nail gun,” you may be able to successfully sue the manufacturer of that gun for your injuries.

How do nail gun injuries happen? 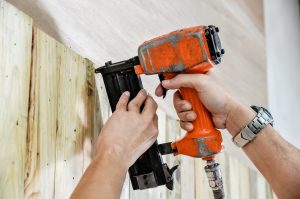 Most nail gun injuries, which can be quite serious, are caused by unintentional firing of the gun. An operator might accidentally bump the spring-loaded safety mechanism on the gun’s muzzle against himself or somebody else, for example, while his or her finger is on the trigger. A nail will then accidentally fire-right into the person the muzzle is touching. Sometimes, the nail gun will double-fire, with a nail that was intentionally fired followed immediately by a second, unintentionally-fired nail. That second nail, particularly if it ricochets into someone’s eye, can cause permanent injury.

What’s the difference between non-sequential vs. sequential nail guns?

Since before 1972, nail gun manufacturers have been aware of serious injury caused by unintentional firing of the guns. In 1972, a manufacturer invented the cure for this problem- a sequential trip device which prevents unintended firing in virtually all circumstances. Yet some nail gun manufacturers have refused to equip their guns with sequential trip as a standard feature. Or they allow the companies that purchase these guns to easily convert their guns to non-sequential operation, endangering their workers.

How can I file a claim?

If you have suffered serious injury as a result of a nail gun accident, feel free to contact Charnas Law Firm, P.C. at 866-980-4499 or fill out the form below.